Eventually, though, they begin to fly.

And poop, well, they always pooped.

And then there is the dust.

And feathers.  The tiniest feathers you have ever seen.

The dust and feathers float out of the box and into the farthest reaches of the room.  Lurking.

And poop.  Did I mention that?

Here is the story:

Over the course of the first few weeks, the chicks grew fast and we had to get creative as we sized up their living space and course corrected for the new, varying needs of the birds.  The first box was small and accessible.  The picture is red because the lamp had a red tinge to it.

Sadie petting the new chicks in their very first home- a 8″ tall box with pine shavings, a red heat lamp and a thermometer to make sure we maintained 95 degrees F.

The second box had higher sides and a dowel to perch on.  Notice in the 2nd box iteration that the chicks began to get as high as possible.  Below, Greta is perched on top of the water.

Greta does not take fecal contamination of her water supply very seriously, so we have to clean out the waterer every couple of hours.

Food too.  I tried to give them classes on cleanliness and the importance of eliminating fecal-oral disease transmission, but they just argued, using the hygiene hypothesis as fodder.  Needless to say, they just kept pooping in their water and food.  By the way, that only improves slightly as they become adults.

And this is embarrassing.  There was some strange force that made me put the chicks in microwaved-warm bowls for cute pictures.  I had no choice.  It only happened this once. 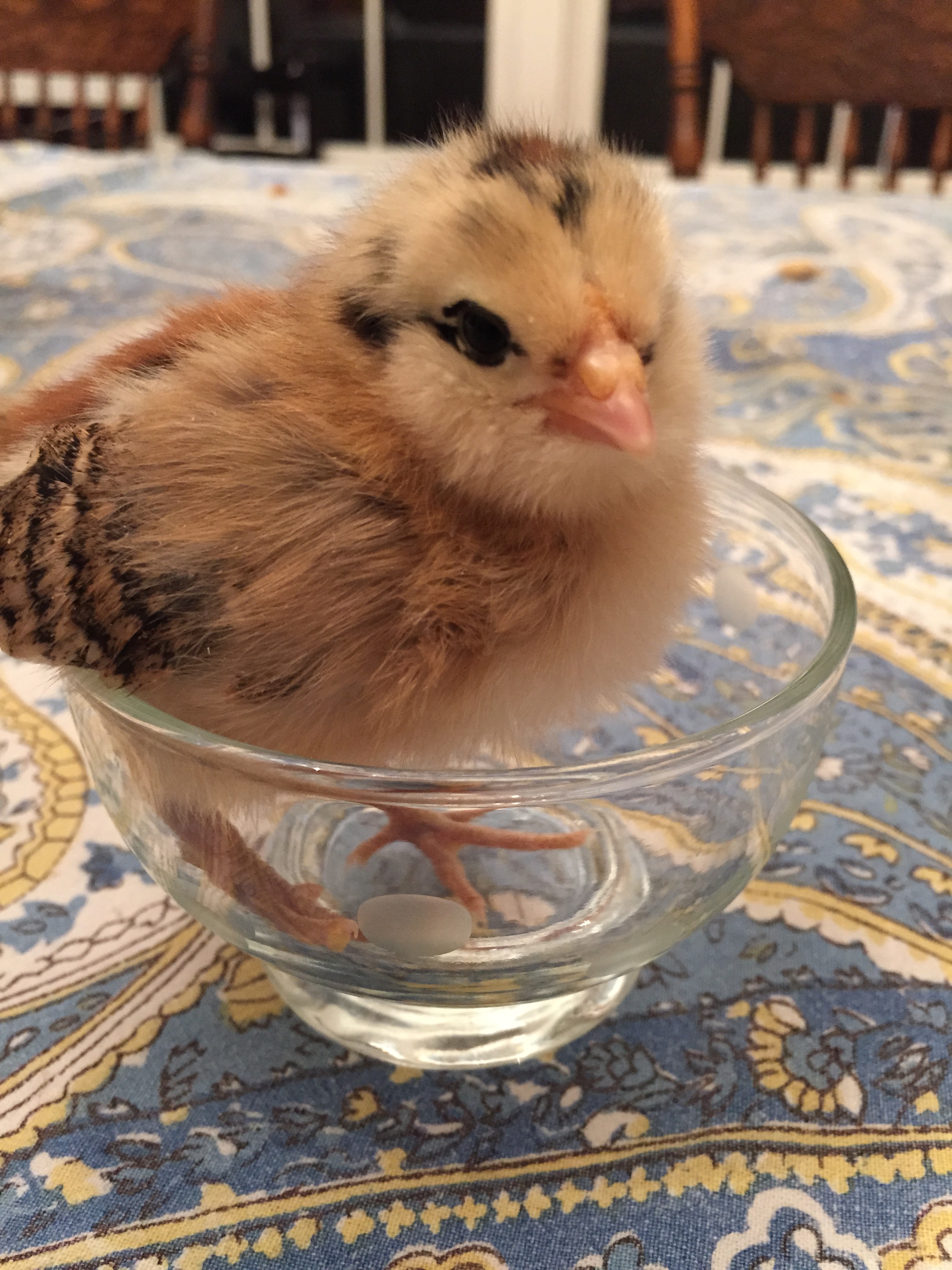 Below is their next home.  Notice that the heat lamp is about 2 feet off the ground and also that the chickens are now perched on the side of the box.  That is because chickens have wings and they like to use them.  They need to, really, they are birds after all.  I think at this point they were just sort of hop-flying and would manage to get out of the box but then would make their sad sounds when they were on the floor and couldn’t get back in.

So I thought if I built some stairs that might help. I taped some shoe boxes to the side of home #3.   I showed them how to use them, but they preferred the helpless method and when it came time for box iteration 4, I took the stairs off.

It wasn’t long before the chicks began to fly out of the box.  Luckily, I hadn’t yet assembled the coop or run, so I used one of the side run pieces with a hinge to close them in the box with plenty of airflow and light when we weren’t prepared to chase them around the house.  The hinge was helpful, because I could leave the whole frame on the top of the box while just opening up half of it for them to fly out and get closer to the warmth of the lamp.

Sadie and I start prepping soil for seed-starting with escaping chickens in the background.

The chicken below is not dead.  She is taking a chicken sunbath with her wing splayed out.  So happy.

The birds used to love to jump on us.  Super cute until you get pooped on.  Even then, still pretty cute. 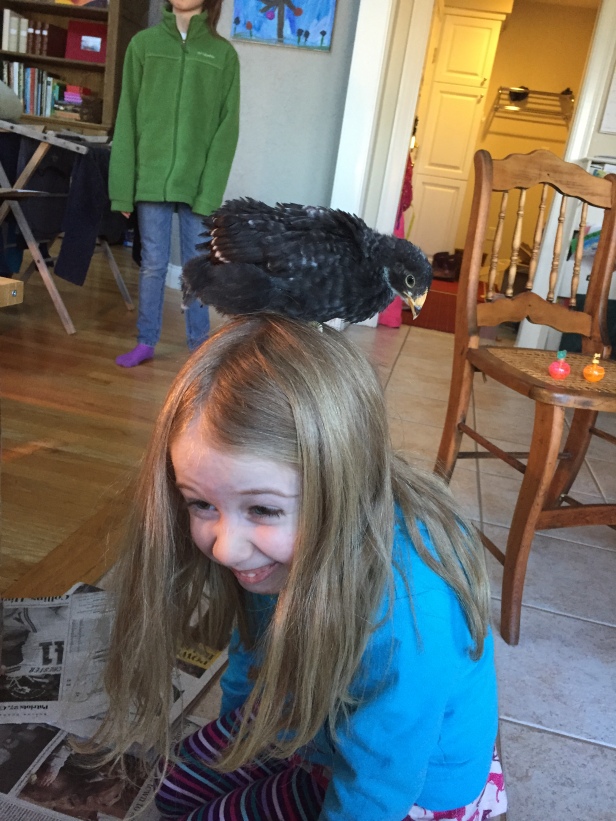 When the chickens no longer needed heat, I set up their home iteration #5 next to the window.    At this point, it became clear that there was a reason why bigger birds should not be living in your kitchen.

So, Chicken house #6 inside our house was a much larger area, the birds really needed more space but it was far too cold outside for them.  At this point, the mess outweighed the cuteness factor and the birds didn’t need such constant watching or heat, so they were relocated to the basement for the last 2 weeks of their inside time.

I again took advantage of the coop pieces and built a small portion of their run in the basement.  This meant disassembling it in the near future, but it made the most sense at the time.  Below:  Chickens in their (temporary) new home, home #6 inside. 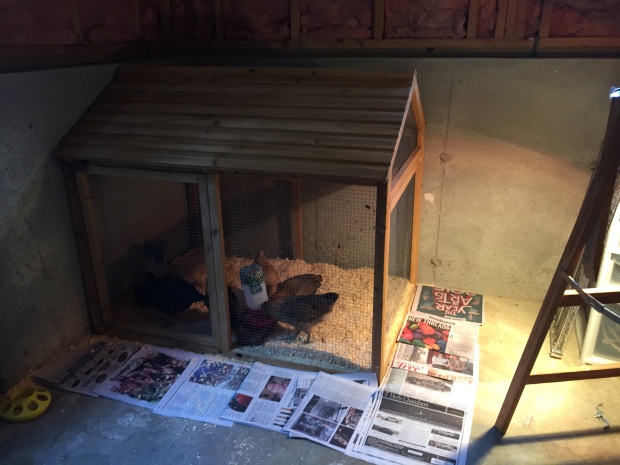 And Sadie in home # 6, before the chickens moved in, pretending to be a chicken, of course. 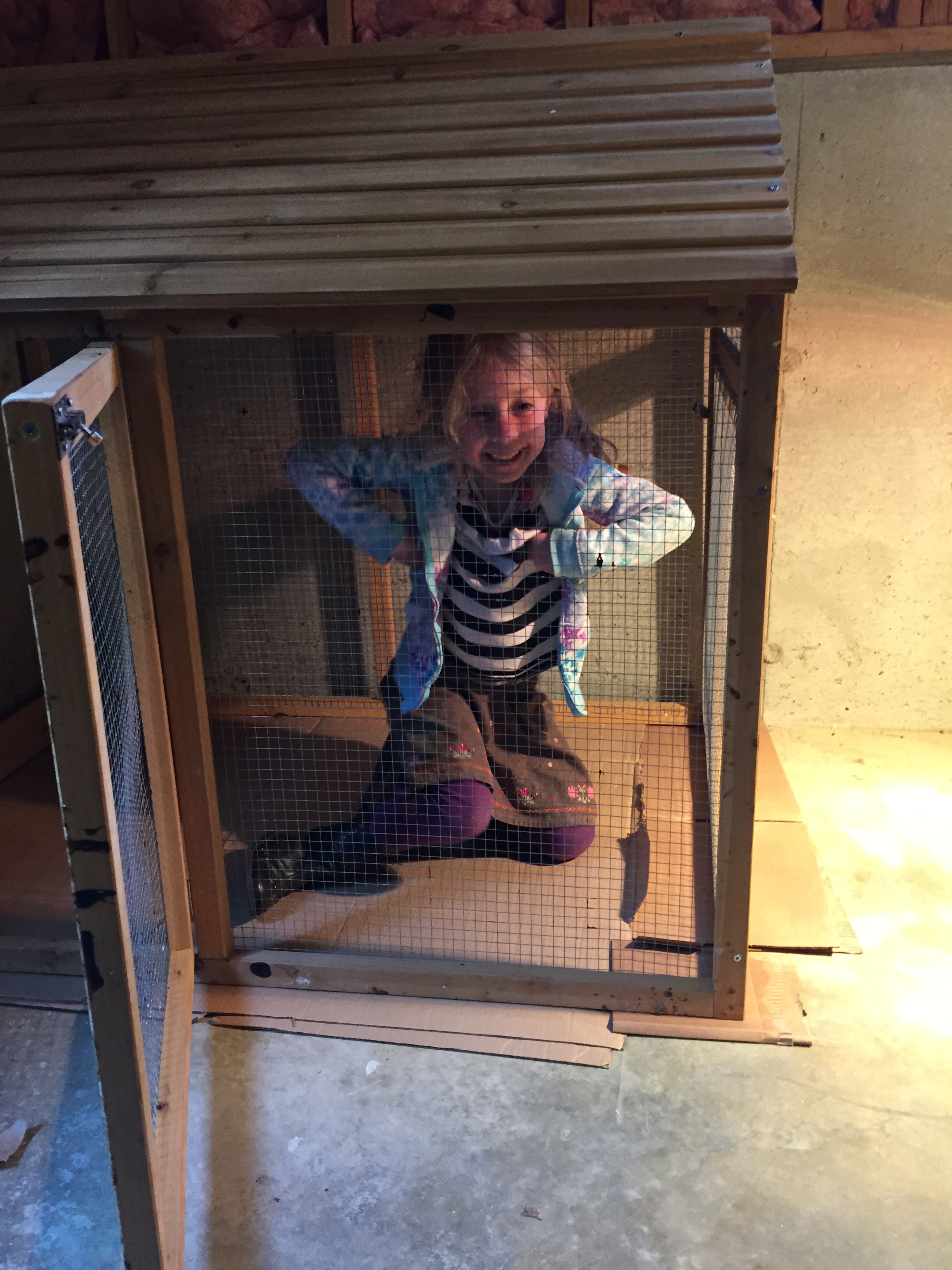 Want some extra special chick raising advice?  See the post 3 Mistakes I made Raising Baby Chicks and How YOU can Avoid them